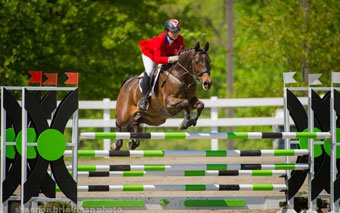 Canadian rider Jessica Phoenix finished 8th at the Jersey Fresh CCI 3* Horse Trials on the Biddesden-bred Part bred Arab Erodium (2001 by VDL Emilion x Calamintha). After successes in the show ring, Erodium was imported to Canada as a young horse by Vanessa Fenwick who competed him for several years before selling him to Kirk Hoppner who gave the ride to Phoenix. This 8th placing qualifies the combination for the 2014 World Equestrian Games in Normandy.