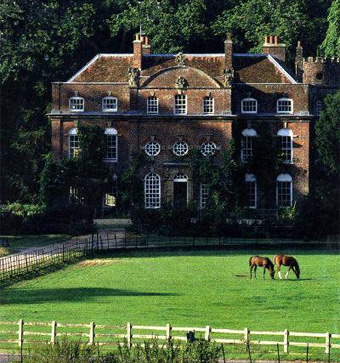 The Biddesden Stud was founded in the 1930s with the arrival of two Arab mares, Dafinetta and Starilla, from the Crabbet Stud. The mares were acquired from Lady Wentworth by Mr and Mrs Bryan Guinness who lived at Biddesden House. In 1945 Bryan Guinness inherited the title of Lord Moyne. His family is still at Biddesden , some of his great grandchildren showing early interest in the horses.

The Arab mare Starilla produced a son, Saladin II (by Naziri) who was a stallion at Biddesden for 23 years and his descendants still grace the paddocks. Dafinetta, the other Crabbet foundation mare, had 17 foals, most of them by Saladin, and her descendants have gone all over the World.

For the first few decades the Stud was primarily Pure bred Arabs but from the early days there were Anglo Arabs too, mostly from a Thoroughbred dam. Crossing the other way was done when the Arab mare Darya was sent to the Wiltshire Thoroughbred stallion Master Spiritus and produced Mellita, dam of Tamarillo, the home-bred eventer who went on to win Badminton and Burghley with William Fox-Pitt and become a long time member of the British team.

The spirit of the Stud is continuity. Our aim is to develop a family of horses, which may make performers par excellence and reliable breeding stock for other people.