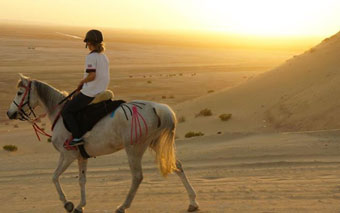 Exciting news as Dace Sainsbury and Ballota (2000 by Sisyrinchium x Beradia) have been selected by EGB for the Young Rider World Championships in Tarbes, France at the the end of July. This pairing have racked up many successes in the past few years including being the best placed British combination and 12th placed overall in the 2012 European Young Rider Endurance Championships and being the only UK-based horse and rider invited to take part in the FEI 3* 160km President’s Cup Endurance ride in Abu Dhabi in February this year. We wish them lots of luck in their endeavour.

We are also thrilled that Krakatau (2010 by Sisyrinchium x Kryzstal) has joined Dace at her base in Dorset and we hope that they have an exciting future ahead of them.